This article describes SSRS scale-out deployment configuration error that can occur during migration of the ReportServer database from SSRS 2008 Enterprise/Developmnet to SSRS 2012 Standard (Native mode). When importing encryption keys from the source server a scale out deployment server is added to the configuration on the new target server that cannot be removed through the user interface. The scale-out deployment configuration is also not supported by the SSRS 2012 Standard edition. I have not verified the reason for this behaviour in detail but the affected system(s) in the article is:
Microsoft SQL Server 2008 SP1 10.0.2841.0 (x64) Developer Edition (source system)
Microsoft SQL Server 2012 SP1 11.0.3401.0 (x64) Standard Edition (target system)
Microsoft Windows Server 2012 R2 Version 6.3 (Build 9600) (target system)

You have your old server  (SQL 2008 SP1) with lot of reports that you would like to migrate to a new server with a newer version of Reporting Services (SQL 2012). To accomplish this you can migrate the ReportServer database from the old server to the new.

Moving the Report Server Databases to Another Computer
http://msdn.microsoft.com/en-us/library/ms156421.aspx

One such issue can be when you try to browse to the report manager url and get the following error:

The feature: “Scale-out deployment” is not supported in this edition of Reporting Services. (rsOperationNotSupported)

Normally that should not impose a problem since you would be able to remove the old server from scale-out deploment from the list in Microsoft Reporting Services Configuration Manager: 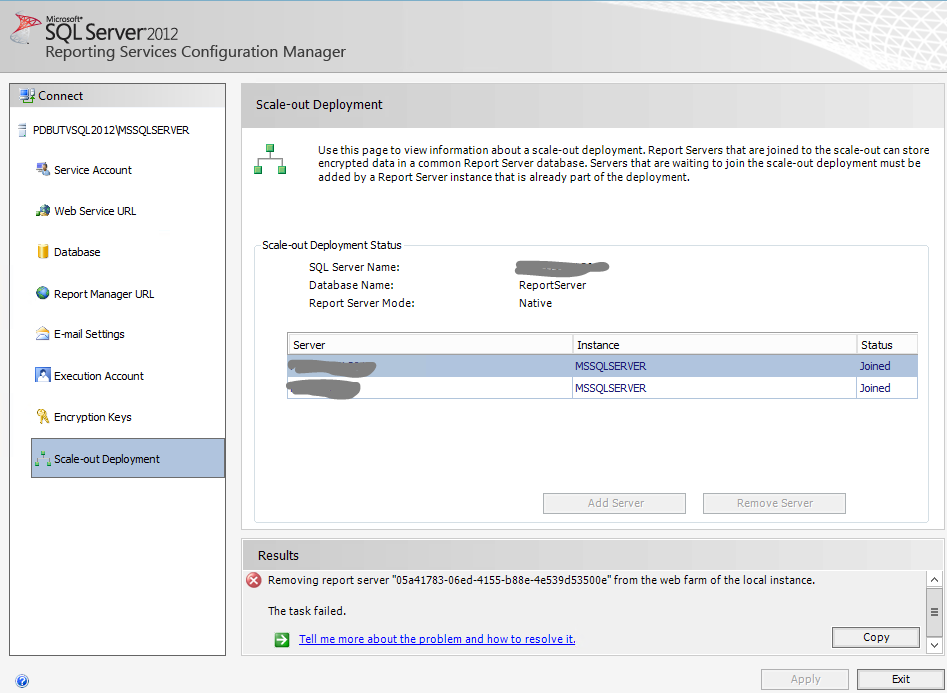 At least one would think so… however as seen in the image above this might not work as expected. If you click the link “Tell me more about the problem and how to resolve it” you will get the following:

Fortunately there is an easy solution for this problem. Open up table dbo.Keys in the ReportServer database on the target server and look at its contents:

Delete the old server from the list and the scale-out deployment error should be gone when you open up report manager url. (At least if you do not have any additional enterprise/developer features referenced from the reportserver database)

Iconic One Theme | Powered by Wordpress